I can not say that I am the most enthusiastic fan of chocolate, but this recipe is one of the few that I am fascinated about. The versions for chocolate truffles are very much. I will present you the one I made on the based on many other recipes.

This is the second version of my recipe. I had a problem with my old website and I have lost some of recipes. This issue provoked me to update recipes that I’ve lost. At the end I think that I’ve lost my web site is positive of the whole situation.Becasue I’ve make new versions of my recipes.

Surely it sounds rather immodest, but it is stronger than me and I can not fail to boast. I have helped several friends to smooth their family relationships. I’ve made several boxes of these tempting truffles. So if you want to capture the halves, it’s a relatively easy one. Make this recipe and your halves will be very happy.

A dark-chocolate truffle melts in my mouth, and I forget about everything else … even the fact that I’m on a diet. 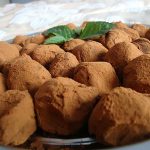 tonichef This post is also available in: I can not say that I am the most enthusiastic fan of chocolate, but this recipe… Desserts Chocolate Truffles European Print This
Serves: 3 Prep Time: 25 minutes Cooking Time: 90 minutes 90 minutes
Nutrition facts: 200 calories 20 grams fat
Rating: 5.0/5 ( 1 voted )

hi 🙂 bross 🙂 Thanks for this amazing recipes!

This is really interesting, You’re a very skilled blogger. I’ve joined your feed and look forward to seeking more of your wonderful post. Also, I have shared your site in my social networks!

Hi, I'm Tony. Cooking is the way I express my creative side to the world. Welcome to my Kitchen Corner on the Internet!

This website uses cookies to improve your experience. We'll assume you're ok with this, but you can opt-out if you wish. Accept Read More